Since season two of Stranger Things was released on Netflix, a problem has arose; people have started to sexualize the young actors who play the main roles on the show.

Now, I’m in no way saying that we, as a society, have never struggled with this problem. It’s always been a problem and will likely continue to be a problem in future years, but that doesn’t mean we can’t speak out about this frankly disgusting problem at the moment.

Millie Bobby Brown, who plays Eleven, and Finn Wolfhard, who plays Mike, have probably been the two on the Netflix show to change the most, physically at least. Both have grown in the past year since the first season was released and many people have taken a notice to that.

Brown, 13 years old, was included as a reason to ‘why TV is sexier than ever’ on W Magazine, as well as being included in multiple lists of “Hottest Actresses.” People are outraged, as they should be! One twitter user wrote, “Poner a Millie Bobby Brown en una lista de las mujeres más sexys es legitimar la pederastia. ES UNA NIÑA. NO ES SEXY. TIENE 13 AÑOS. BASTA.” Which translates to ‘Putting Millie Bobby Brown on a list of the sexiest women is legitimizing pedophilia. SHE’S A GIRL. IT IS NOT SEXY. SHE IS 13. ENOUGH.’  Another twitter user thinks of it in a different way and writes in a series of tweets, “1. My son is exactly two weeks older than Millie Bobby Brown. The thought of any creepy adults sexualizing him the way they apparently do to 2. her, and Finn Wolfhard, and the other Stranger Things kids is frankly quite horrifying. These kids are 13 and 14 years old, ffs. 3. They may be actors, but they are still KIDS. Let them be kids, goddamit. It is not at all appropriate to count down the time until a 4. child actor turns 18 and can be “officially” perved on. Stop it. Ok, parent rant over.” And that’s not even all of it, she is constantly being sexualized in other places and ways as well, but to talk about them all would be to write a short novel.

Brown’s costar, Wolfhard, is also a victim of sexualization from the older population. Ali Michael, a 27 year old model, took to her Instagram story to post a picture of the 14 year old actor, captioning it, “Not to be weird but hit me up in 4 years @finnwolfhardofficial” Though we do not know if she took it off before it automatically deleted, we do know people saw this and were irate. She did eventually apologize, making claims that it was a joke, though that does not excuse or justify her actions. 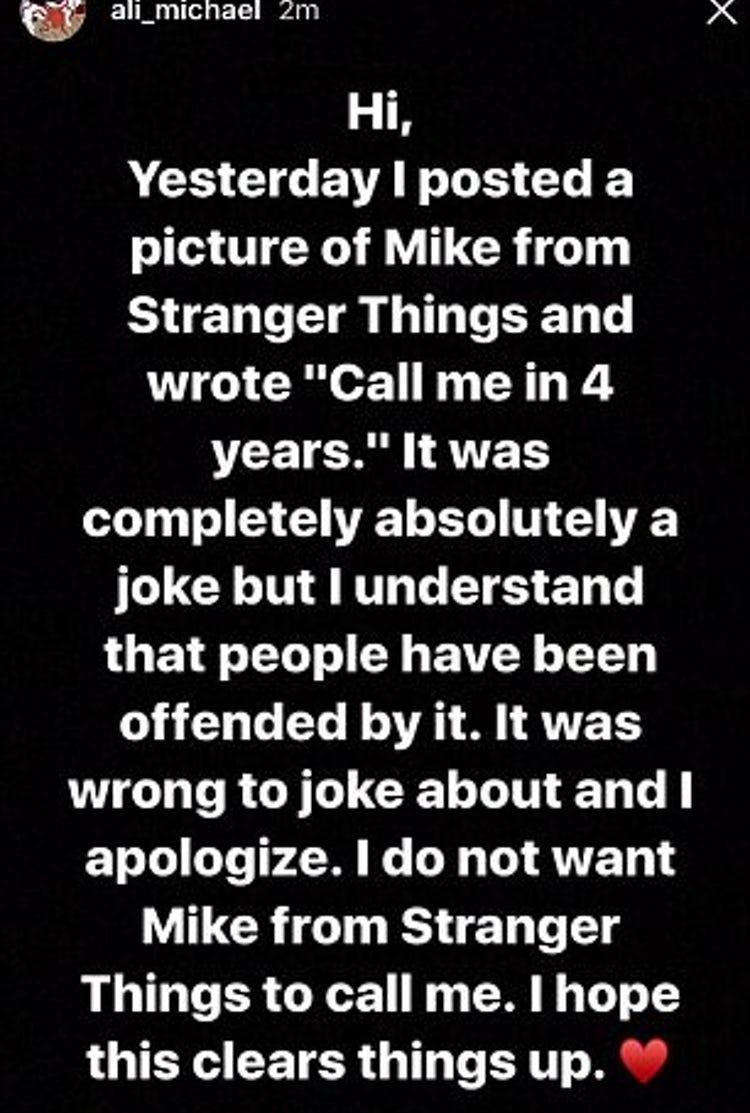 Wolfhard briefly touched on this encounter in an interview with TMZ, saying that he thought her actions were gross, but then ultimately trailing off saying he guessed it was fine. Wolfhard has been receiving comments like this for some time, mostly from people 20 years of age or older. One user took to twitter to write, “pedophilia is old men who are attracted to children but it’s also the 20+ year old women sexualising Finn Wolfhard on their snapchat stories” They truly did hit on the fact that yes, it is pedophilia. Nonetheless, older people, no matter their gender, making sexual advances towards children is creepy and pedophilia in one sense or another.

Some people have even felt a need to point out that though they are celebrities and world-wide known actors, they are still children!

I would like to again point out that this has always been a problem and will continue to be one for quite some time. This does not just happen to child actors, it happens to most people and it is gross and does need to be stopped. I am writing about these two specifically because they have such a large following, which means in the end more people are seeing that problems like these occur much more often than they should. In the end, this problem will not begin to get better until we truly acknowledge who it hurts and how it hurts them, as well as getting media coverage like everyone is doing at this moment in time. To try and help this ongoing problem, you can also write articles, make videos, speeches, go to social media, and many more things. Even the smallest of actions bring awareness to at least one new person. The only way you can make it worse is by contributing to these kind of actions, or seeing them and still staying silent. If you have a voice, you must use it any way you can to help bring this problem to an end.